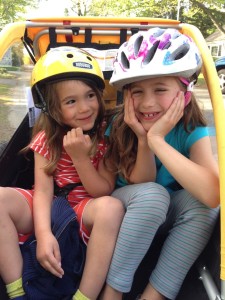 My last daycare check is in the mail. I reach this milestone with a mix of emotions.

In the first picture above, Zoe was visiting Mia and me in the hospital. Mia was just thirty-six hours old. It was a dozen hours before she had her first seizures which meant she had to be sent alone with medical staff by ambulance from the hospital where she was born to a bigger one across the river, with a full NICU, and the ability to diagnose her stroke.

In the second picture above, taken last week, Mia and Zoe are goofing around, far too big to be in the bike trailer, but asking me to take them for a ride for fun. Zoe is seven. Mia is nearly five.

In both pictures, their sisterhood is so present. It’s ironic to me now to see Mia sucking her left thumb and Zoe studying her right thumb. This was before, before we knew that Mia would become a lefty for sure.

Last year, I actively participated in Pediatric Stroke Awareness Month, blogging daily through the month of May. That effort has had many benefits, new contacts with families and professionals interested in pediatric stroke, sharing information broadly that seems to benefit others, and most personally, helping me affirm how far Mia has come with my support. It was cathartic and healing to be able to share more details of our journey. And, we raised significant funds for Children’s Hemiplegia and Stroke Association.

This year, I considered repeating my blogging streak. I could easily have written updates on all the topics of a year ago, showing Mia as an even more competent kid, now almost five. But, I made an active choice not to blog. I am investing more this year in my own self-care. Blogging that intensively last year meant lost sleep. And, this spring, we are in a big transition. I wanted some space to feel my way through the changes.

To work full-time outside the home as a single parent requires tremendous logistical support. Zoe was in a family daycare in our neighborhood her first two-and-a-half years, but even before I was pregnant with my second child, I had visited the daycare/preschool where I would later send both girls. I loved it then and still do now. Some of the teachers have been there more than twenty years. They care for infants all the way through pre-K. Both girls started there when my maternity leave ended. Zoe was in the youngest preschool class and Mia was in the infant room. For three years, both girls went there full time. For the past two years, Mia has been in preschool there and on Monday she goes for kindergarten orientation at the bilingual school where she’ll join Zoe in the fall.

Mia has just three weeks left at this beloved school. Today, she hosted me as her special guest in her class brunch. I’ve been feeling nostalgic as the end of this era approaches. I’m putting some of that energy into making a special gift for the school and cards for the teachers.

Of course, my budget will be easier without having the expense of daycare. I look forward to seeing my bank balance when my mortgage payment exceeds my childcare expenses again. That has not been true since before I had my second child. I feel grateful to have been able to afford such excellent care, to have had the amazing continuity so that both children have had many of the same beloved teachers, and that we’ve been there long enough to feel like they are part of our family, certainly part of the village supporting me in raising these beautiful girls.

When I signed us up for two spots in this daycare, even before Mia had been born, I had no idea that she would have any special needs. And then she did, and I took a lot of time in the beginning to orient the caregivers to exactly how to handle Mia when picking her up, not to prop her in sitting but to let her lie down and find her own way there. As a toddler, she went to school wearing a splint on her unaffected left hand to give her time every day to practice with righty, modified constraint therapy. The teachers followed my suggestions for sensory play with my promise that whatever was good for Mia would be great for other children too. Mia played with shaving cream, sand, water, rice. And then, after eating snack with righty, the teachers could help her take off her splint so she could go outside to play and she could use both hands and arms to master the playground by climbing, swinging, traversing the monkey bars, and sliding.

Each year that Mia has transitioned, I have met with the new teachers to orient them to her needs. I have written up a one or two-page set of suggestions for how to best support Mia’s development. Remarkably, this year, both of Mia’s teachers have marveled at her curiosity, eagerness to participate, persistence and independence, and self-care skills that are on par or ahead of some of her peers. It’s through their eyes that I have come to see Mia as so ready to take the next step, to leap from the early childhood years into elementary school with her big sister leading the way.

And, it is nearly time for me to make that transition too, to escort Mia to kindergarten orientation, to believe that we made it, not just through the financial hurdle of getting care for two kids from birth to five while working full time, but through the developmental hurdles put in our path by Mia’s stroke.

Here are my girls in action recently, Mia on her 16″ bike, confidently making a turn, Zoe joyously swinging on the trapeze swing. 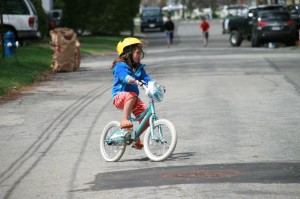 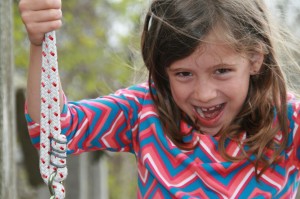 I will close with gratitude for making it to this transition with the love and support of many. Here’s one of Mia’s recent pieces of art, where she so clearly affirms her left-handedness. 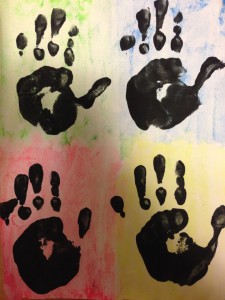 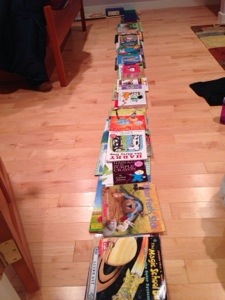 We reached another milestone today with 600 days in a row of reading aloud together.

In updating our main Reading Streak page, I noticed some patterns of interest. While we’re still in the Little House books, having finished our third reading of the Laura books and now into the Rose books for the third time, and closing in on Zoe’s goal of reading about all five generations of Little House girls and women, we’ve branched out a bit too.

Both girls love American Girl books and we’ve read all the Molly books, both Saige books, both Mia books, and three Josefina books. We also had a nonfiction run with Jane Goodall’s wonderful, “My Life with the Chimpanzees” and “The Chimpanzees I Love” and a couple of her picture books too. I’m including select picture books on our list that are notable. We read lots of picture books that I don’t note. Mia also discovered “The Puppy Place” series at the library, which I don’t love but the kids do.

The book trail pictured here is Mia’s work on a day when she napped for thirty minutes and then entertained herself late into the evening by paving a path of books. I like to imagine her walking through all these books as she was building her path. I only discovered the finished product when I was ready for bed myself.

Mia requested “Charlotte’s Web” again within the past 100 days. It’s her perennial favorite, the one book for which she can sustain attention more than any other chapter book. Often, while I read, Zoe lies or sits next to me and listens intently while Mia plays nearby. But, I know that Mia is listening too as she’ll comment on the characters and plot in surprising ways.

The girls and I are proud to have made it to 600. We manage to fit in reading time twice a day most days and once a day even on the busiest days.