Note that when she skates forward, she can rotate her left leg (unaffected side) outward and push off on the inner edge of the skate blade. But, she is doing something else with her right leg and foot (affected side). She has the foot oriented such that she’s leaning on the outer edge of the blade and the foot is pointing straight ahead. When Mia skates fast at hockey practice across the ice, she literally starts at the goal line and ends up at the blue line and turns around and does the same thing again, progressing at roughly a forty-five degree angle across the ice from where she starts. At first, I thought she was trying to get to where Zoe was along the boards. But, now it makes sense. Her left leg is doing most of the work to propel her forward so she’s not skating in a straight line.

Note that she has a hard time spending much time bearing weight on her right leg and doesn’t seem to know how to orient it. Unlike many beginning skaters, her ankle is bent outward.

Each practice, the kids do some routine skating drills including “making snow” where they brace one foot against the boards and use the other foot to repeatedly push outward to make a little pile of snow. They do this first with one foot and then with the other. After that, they do “C cuts” which helps them learn to skate backwards. Mia has complained that it’s hard for her to do these skills with righty. This might be her first direct experience of finding something difficult with her right leg and foot. She has expressed similar frustrations with her right hand when trying to do certain tasks.

Other coaches sometimes help orient Mia’s stick so it won’t trip the other kids, packed tightly, nearly forty of them lined up along the boards between the goal line and the blue line.

In my previous post about Preparing for First Hockey Season, Mia was not so advanced in her skating so she was essentially walking on ice, falling and getting up. There was no obvious difference in how she was using her legs in that video clip from two months ago, repeated here for reference.

When walking and running, Mia has no obvious issue with her gait, despite her early stroke. I’ve been wondering about her footedness. In soccer, she chooses to kick the ball with her left foot, and briefly balances on her right foot. She has grown skillful on a scooter, balancing on her left foot and pushing off with her right foot, even using her right foot to depress the rear brake on the scooter which is an advanced maneuver. Here she is on the scooter in early November.

In recent discussions on a forum for families with children who have hemiplegia or had a stroke, there’s been a discussion about how to support the development of these children’s affected foot or leg. I chimed in mentioning my observations about her scooter usage and her soccer preferences, and suggested that skating would be an excellent activity and indicated that Mia is learning now. Part of my goal in documenting Mia’s learning process in detail here is to share the nonlinearity of learning, even for Mia who by all accounts has so far had the best possible recovery from her early stroke.

Mia’s attitude continues to be incredibly determined. She was moved up from the “chair pushers” after just a few weeks to the Red group. Then, when she outgrew her skates and had a few rough practices as she adjusted to her new skates, I offered that she could go back to chair pushers. She declined. Then, in a moment of frustration, she asked to switch groups. She only stayed with the chair pushers a few minutes before returning to the Red group. She is starting to skate faster and wants to keep up and learn. She seems to not mind being among the slowest in the group, and may not notice as she’s so focused and determined.

As I observe and document Mia’s progress, I wonder what to do to help her. My goals are to support her in having fun and learning new skills that are good for her overall development, regardless of whether she wants to continue with hockey.

I could pursue a direct route and send her for private skating lessons or talk with Mia about what she’s doing and how it affects her skating. For now, at this age, I prefer a playful approach combined with giving her neuromuscular system time to mature and figure out how to skate.

I’ve been consulting with others and thinking myself of off-ice activities, inspired by Feldenkrais to introduce variablity in a playful way that will both wake up and strengthen Mia’s ability to stand upright on her skates, and freely shift her weight and use her legs and feet in a variety of ways that she will hopefully be able to transfer at some point into an improved skating stride. I will attempt to experiment with some new warm-up activities for all three of us, so it’s just something we do as a family to get ready for skating, and see what emerges.

My girls think it’s hysterical that my first hockey shin guards were improvised, soccer shin guards paired with foam knee pads. That didn’t hold me back. I played one year with boys, starting when I was eight, and then joined the girls’ league. I went on to play Division I hockey at Brown University, just as the game was shifting to a more competitive level.

Two weeks ago, I signed the girls up for hockey and myself up to coach. The season has already started, but soccer still fills our Saturdays for another couple weeks. After figuring out that their skates still fit, and Zoe had a helmet, but Mia did not, we went shopping. I bought full sets of equipment the first weekend we decided the girls want to play but we hadn’t had time to touch it since. Sunday, they tried it all on, I showed them how to tape their sticks, we labeled it all with their names and color-coded tape (green for Mia, pink for Zoe), and the girls got so excited that they wanted to go to public skating. 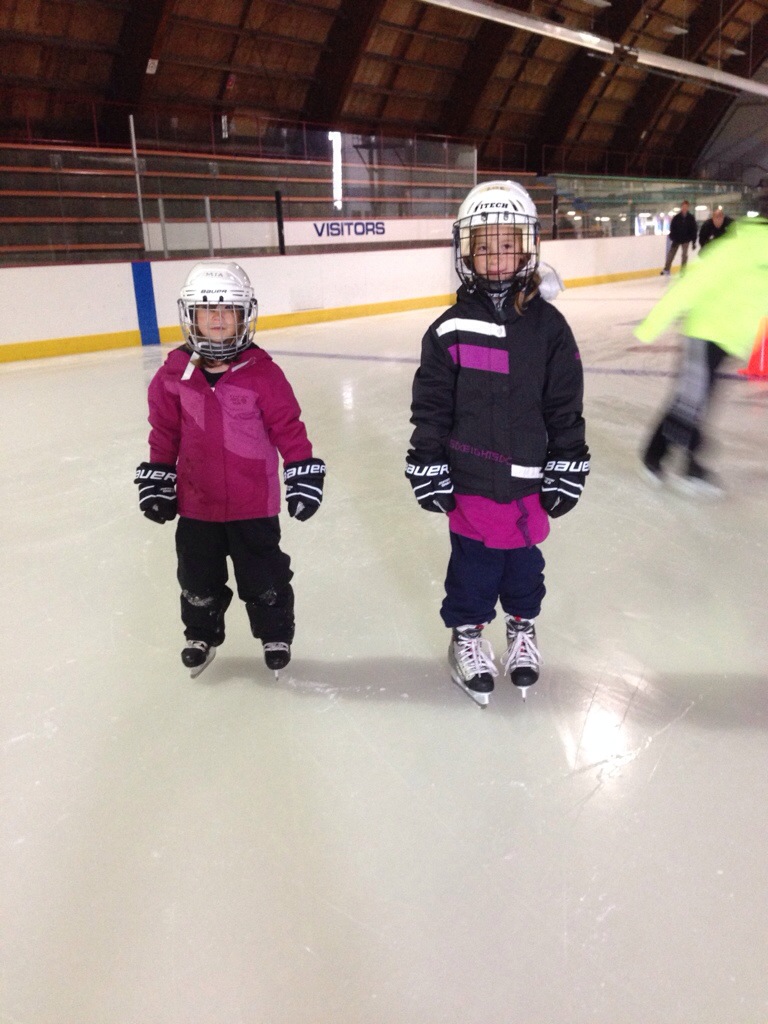 It was not crowded, skating was fun and leisurely. Both girls wore their hockey gloves. Mia brought me her right one and asked for help to find spots for each finger. She kept it on easily throughout the hour of skating.

Both girls picked up where they had left off with their skating after a season of lessons last winter. Zoe was too fast to capture well on video in the low light. She progressed a great deal last winter, which was the first year when it was feasible for me to take both girls skating regularly, both to open skate and to weekly lessons for four months.

Here’s a moment when Zoe wanted to skate with Mia. For me, it was so lovely to be on the ice with them both. They needed much less help from me than last year, or any prior year, and I can glimpse ahead that in a few years, they’ll be skating circles around me. Zoe told me that she feels lucky that I know all about the equipment and about hockey. She has noticed that most of the soccer coaches are men and it already makes a difference to her to have me there on the ice with her.

In this tiny clip, I captured Mia falling and getting up quickly and easily. Anyone familiar with hockey knows this is the first and most important skill. The notable moment of this video for me is that to stand up, Mia first stands her right foot. Last winter, she used her left foot exclusively. Her right side is the side affected by her stroke. I’m so happy to see her using both sides now to fall and get up. And, I was also happy that she was able to manage her glove on her right hand.

Just to show our history of attempting to skate each winter, here’s a photo log. We missed one winter when Mia was an infant. 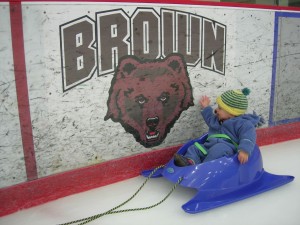 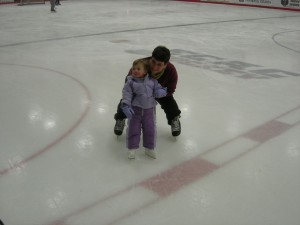 January 2011 – Mara helping Mia get her skates on 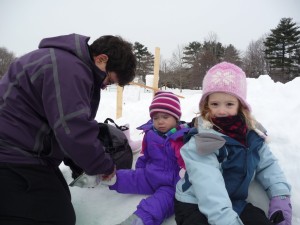 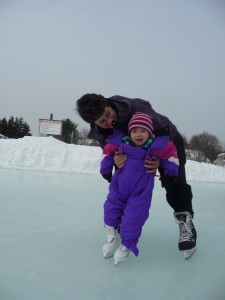 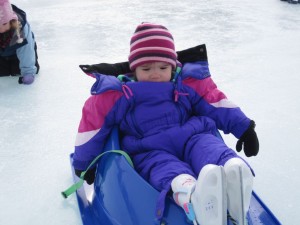 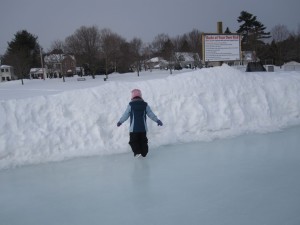 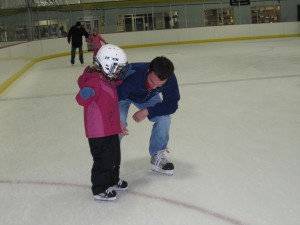 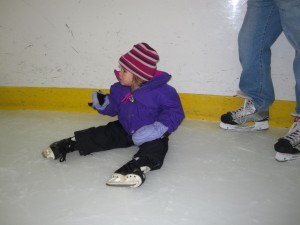 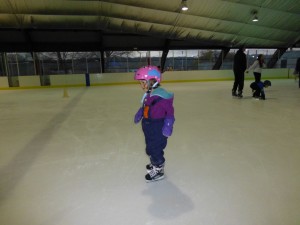 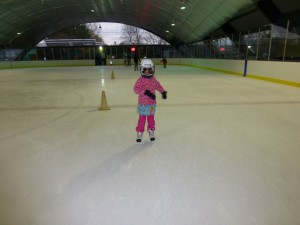