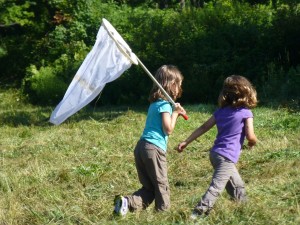 We’ve been traveling a lot. This picture is from this past weekend when Zoe and Mia spent a lot of time hunting butterflies in Vermont.

Modern neuroscience is fueled by brain imaging and many new theories about how we learn what we learn. One such concept is that of mirror neurons, that by watching someone else do something, one can gain neural activity in the corresponding neurons.

Another is that “Cells that fire together, wire together.” This theory is attributed to Donald Hebb but popularized by Norman Doidge in The Brain That Changes Itself, worth reading for anyone interested in better understanding neuroplasticity.

A friend shared a short TED Talk with me that I include below. It’s an honest emotional account by first time parents of a young stroke survivor who is a year-and-a-half younger than Mia. Much of it resonates with me. While I was not a first-time parent, I was taking a leap in having a second child as a single mother about to turn forty. When Mia was a full-term healthy baby weighing 9 pounds 5 ounces with excellent Apgar scores, I was relieved and so happy. I too was not ready for the sudden hospital transfer when Mia was two days old, the news after many tests that she had had a stroke. I also asked impossible questions. Why me? What will she be like? What can I do to make her better? Mia wasn’t part of a Mirror Neuron Pilot but she has piloted her share of therapies and approaches. She has definitely taught me more than I’ve taught her, and she is an incredible gift. As the parents in the TED Talk conclude, “Consider what you have as a gift, what you miss as an opportunity.”

When Mia was about two months old, a wise friend gave me sound advice to love her as a whole child, not less than because of her stroke. There’s been an active discussion within the community of parents of pediatric stroke survivors about the risk of treating the affected arm or leg at the expense of the child’s sense of wholeness. Many of these kids face challenges with anxiety as older kids, teenagers, and young adults. And, their parents find themselves wondering once again if they chose the right therapies to do and not do.

I embrace the approach of the parents in this TED Talk. Shower all children with love, and show them what you know and love. The world is an incredible mirror. They will find their way. 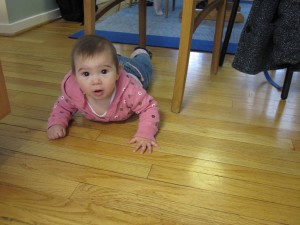 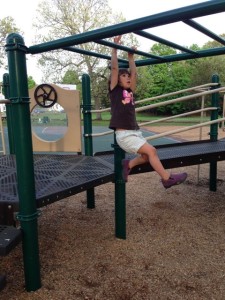