While Mia is more drawn to team sports than gymnastics, she continues to challenge herself on our backyard play structure and on similar challenges at larger playgrounds.

She’s come so far from five years ago when she first managed to skin-the-cat, as the flip over is called on this triple trapeze bar with two rings.

I love her inventiveness, how she does the movement to get her feet to flip over and then reverses it, then she starts from the midpoint, to flip back, again and again. As you watch the videos, notice how she is patient with herself, giving her right hand time to find its way into the ring, to grip, how she leads with her left hand but waits until both hands are participating to flip herself over. She uses her eyes to help make sure her right hand is where she wants it to be as her sensation in righty is reduced.

Mia had a stroke at birth and has right hemiplegia, affecting her right arm and hand. 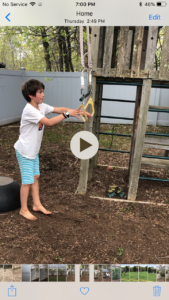 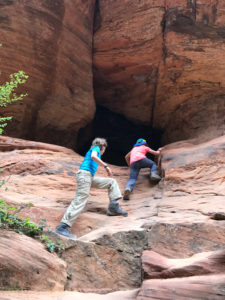 Mia loves to climb. Here she is at age seven, after hiking Angel’s Landing in Zion National Park, leading her older sister Zoe up to explore a little cave. She uses all four limbs while climbing and scrambling, which is therapeutic but mostly just fun!

Mia had a stroke at birth and has right hemiplegia. 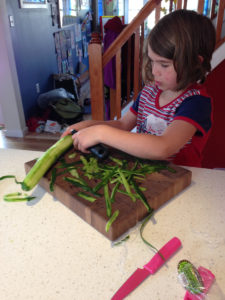 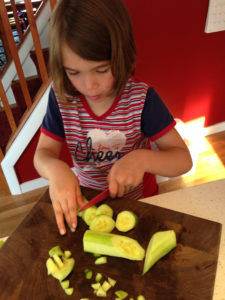 At age 5, Mia was able to peel and cut a cucumber independently with some supervision. She has more limited use of her right hand due to a stroke at birth and resulting hemiplegia. Notice how she’s using her right thumb to hold the cucumber in place. For kids and adults with more limited use of their affected hand, cutting boards are available that hold things in place.

Today, at age 8, she used a utility knife to cut through cardboard for a school project. I don’t have a picture of that because I was supervising a bit more closely. 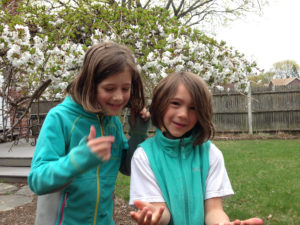 Spontaneous supination (palm up) with both hands. My girls were playing with cherry blossom petals, and Mia offered her palms up to receive the petals from her sister. Supination has been one of Mia’s goals since she was an infant as she had a stroke at birth. Many people with hemiplegia struggle to turn the palm of their affected hand upwards. In the picture above, Mia is 5 years old and Zoe is 8 years old.

And, because this is the season when the cherry tree blooms in our garden, we use it every year as a way of marking time. So, in 2018, my girls are now 11 and 8. You may notice in the picture below that Zoe is as tall as the cherry tree. And, Mia has both of her arms in a relaxed position by her sides. This was not always easy for her as she used to frequently hold her right arm in a contracted and pronated position with both her elbow and wrist flexed. 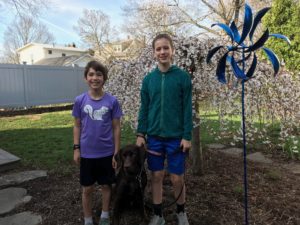 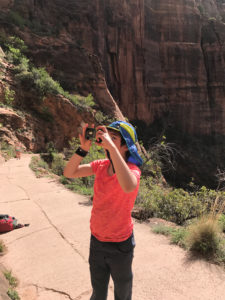 Mia had a stroke around the time she was born. Here, she is using her left thumb to take a picture with the camera upside down. She was seven years old at the time of this picture in Zion National Park. We learned this technique from other families with a kid who has right hemiplegia, like Mia.

Note that when she skates forward, she can rotate her left leg (unaffected side) outward and push off on the inner edge of the skate blade. But, she is doing something else with her right leg and foot (affected side). She has the foot oriented such that she’s leaning on the outer edge of the blade and the foot is pointing straight ahead. When Mia skates fast at hockey practice across the ice, she literally starts at the goal line and ends up at the blue line and turns around and does the same thing again, progressing at roughly a forty-five degree angle across the ice from where she starts. At first, I thought she was trying to get to where Zoe was along the boards. But, now it makes sense. Her left leg is doing most of the work to propel her forward so she’s not skating in a straight line.

Note that she has a hard time spending much time bearing weight on her right leg and doesn’t seem to know how to orient it. Unlike many beginning skaters, her ankle is bent outward.

Each practice, the kids do some routine skating drills including “making snow” where they brace one foot against the boards and use the other foot to repeatedly push outward to make a little pile of snow. They do this first with one foot and then with the other. After that, they do “C cuts” which helps them learn to skate backwards. Mia has complained that it’s hard for her to do these skills with righty. This might be her first direct experience of finding something difficult with her right leg and foot. She has expressed similar frustrations with her right hand when trying to do certain tasks.

Other coaches sometimes help orient Mia’s stick so it won’t trip the other kids, packed tightly, nearly forty of them lined up along the boards between the goal line and the blue line.

In my previous post about Preparing for First Hockey Season, Mia was not so advanced in her skating so she was essentially walking on ice, falling and getting up. There was no obvious difference in how she was using her legs in that video clip from two months ago, repeated here for reference.

When walking and running, Mia has no obvious issue with her gait, despite her early stroke. I’ve been wondering about her footedness. In soccer, she chooses to kick the ball with her left foot, and briefly balances on her right foot. She has grown skillful on a scooter, balancing on her left foot and pushing off with her right foot, even using her right foot to depress the rear brake on the scooter which is an advanced maneuver. Here she is on the scooter in early November.

In recent discussions on a forum for families with children who have hemiplegia or had a stroke, there’s been a discussion about how to support the development of these children’s affected foot or leg. I chimed in mentioning my observations about her scooter usage and her soccer preferences, and suggested that skating would be an excellent activity and indicated that Mia is learning now. Part of my goal in documenting Mia’s learning process in detail here is to share the nonlinearity of learning, even for Mia who by all accounts has so far had the best possible recovery from her early stroke.

Mia’s attitude continues to be incredibly determined. She was moved up from the “chair pushers” after just a few weeks to the Red group. Then, when she outgrew her skates and had a few rough practices as she adjusted to her new skates, I offered that she could go back to chair pushers. She declined. Then, in a moment of frustration, she asked to switch groups. She only stayed with the chair pushers a few minutes before returning to the Red group. She is starting to skate faster and wants to keep up and learn. She seems to not mind being among the slowest in the group, and may not notice as she’s so focused and determined.

As I observe and document Mia’s progress, I wonder what to do to help her. My goals are to support her in having fun and learning new skills that are good for her overall development, regardless of whether she wants to continue with hockey.

I could pursue a direct route and send her for private skating lessons or talk with Mia about what she’s doing and how it affects her skating. For now, at this age, I prefer a playful approach combined with giving her neuromuscular system time to mature and figure out how to skate.

I’ve been consulting with others and thinking myself of off-ice activities, inspired by Feldenkrais to introduce variablity in a playful way that will both wake up and strengthen Mia’s ability to stand upright on her skates, and freely shift her weight and use her legs and feet in a variety of ways that she will hopefully be able to transfer at some point into an improved skating stride. I will attempt to experiment with some new warm-up activities for all three of us, so it’s just something we do as a family to get ready for skating, and see what emerges.