Mia taught herself to do skin-the-cat the weekend of her birthday party, days before turning four. This is one of many seemingly amazing milestones she’s hit this spring and summer. I’ve been celebrating them along with her and Zoe. In fact, the first time she did it I was not watching and Zoe helped her. Mia came to tell me and repeatedly told me, “I’m so proud of myself!” And, she was, she owned her new accomplishment.

Here she is, the morning of her birthday party in full action.

I have a series of posts in mind that I’d like to write over time to show and tell how I think it’s been possible for Mia to master so much. I happen to have a lot of photos and videos of her development. This is the first such post. Mia is incredibly determined and courageous and always has been. I’m quite attuned to her needs and goals and have focused a lot of attention on providing an environment where she can continue to thrive and learn, sometimes in surprising ways. Mia has been pretty persistent at mastering her world since infancy and that continues. Her repeated practice in different settings allows her many “successive approximations” until she masters a new skill. This notion of “successive approximations” is one that Feldenkrais wrote and spoke of often.

At four years old, Mia definitely owns her “I can” attitude. She has many experiences of watching her older sister, Zoe, master one thing after another. And, Mia comes along finding her own way to do many of the same things in her own time. Just this week, she surprised me in the lake where we swim. She’s swimming farther each day than the last without assistance or floatation and now she’s asking to dive under my legs, just like Zoe. And, she surfaces with rocks in her clenched fists asking me to guess which one has the rock and which one has just sand.

This story goes way back to when Zoe was an infant and some friends lent us this baby hammock for her to sleep in. Zoe was so mobile that she only lasted a couple of months in this hammock because I was afraid she’d end up on her belly in the soft hammock and obstruct her breathing. 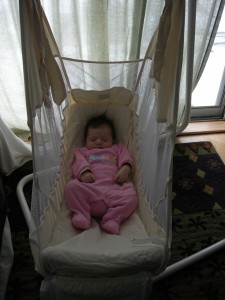 Those friends needed it to lend to another family so we gave it back but I asked to borrow it again when I was expecting my second child. I had it set up days before Mia was born, and Zoe discovered that it worked pretty well as a place to swing like a monkey. Zoe was nearly 2.5 at the time. 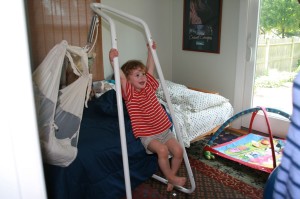 Mia did sleep in it too for a few months. By the time she was done with it as a sleeping hammock, Zoe’s habit of swinging from it was so established that I put the hammock away and left the frame in my bedroom for daily gymnastics practice. 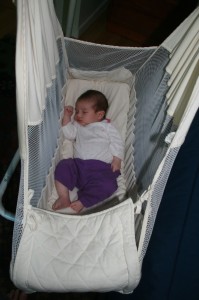 Mia started to swing from it a couple months after turning two.

Zoe taught herself to do skin-the-cat on the hammock frame when she was 4 years, 8 months.

When Mia was nearly 3, she could swing from rings like these. Soon after this picture, we got our own set for our outdoor playset. 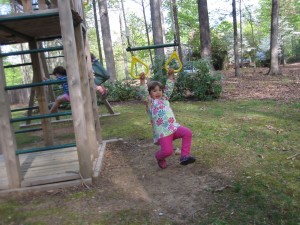 At Zoe’s, sixth birthday party, when Mia was 3.5, Mia was able to support herself well on the bar and pull her knees to her chest. 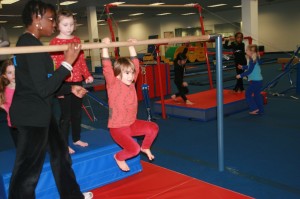 So, Mia’s seemingly sudden mastery of skin-the-cat on the triple trapeze swing featured at the top of this post really can be traced all the way back to Zoe discovering what a wonderful piece of equipment that baby hammock could be, without the hammock of course.

The frame remains in my bedroom. I’ll close with a video clip of Mia working and working to get her feet on the frame of it. She had done it several times before I started trying to capture it on video so by this time she was tired. But, you can still see her determination, intense persistent efforts and  good attitude. Note how she experiments with placing her hands in many different spots to see how that feels and works. Allowing all of these attempts is what ultimately helps Mia build strength to master these skills and many others. And, she can transfer the same skills to doing the monkey bars.