Zoe is a great inspiration to Mia. Just this morning, Zoe put her hair in pigtails, and before I knew it, Mia had too. Zoe is seven. Mia will be four years and nine months old tomorrow. Zoe wasn’t even aware of the idea of doing her own ponytail or pigtails until she was in kindergarten last year and saw a classmate doing it. Mia has the good fortune of watching Zoe do everything day after day so she gets the idea that she can too. 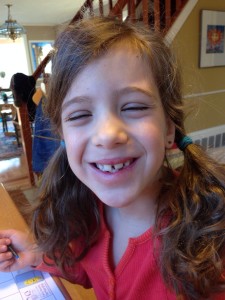 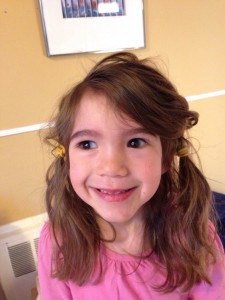 I don’t always see it coming with these new challenges that Mia defines for herself. A couple of weeks ago at bedtime, I noticed that Mia was brushing her hair a ton with leave-in-conditioner and getting frustrated with the tangles. I thought her frustration was related to hairbrushing. It wasn’t until the next morning, when I was sitting on the couch reading to them and Mia was attempting a ponytail and getting frustrated and then going into the extensive brushing routine again that I realized her quest to give herself a ponytail.

Mia is very dominantly left handed and she can do a lot with her right hand, especially in bimanual (two-handed) activities, but learning a new skill behind her head seemed pretty daunting to me as the observer.

So, here’s what I observed in an e-mail I sent to her occupational therapist. “Mia has embarked on teaching herself to do a ponytail on her own hair. She has many of the concepts and steps but not all so is getting frustrated. I am looking for ideas and ways to support her. She puts the elastic on her left hand, uses both hands to gather the hair into her right hand to hold it there. She uses her teeth to get the elastic from her left wrist onto her left hand, and then manages to get it around the bunch of hair somehow but gets frustrated and stuck after that. She then claims her hair is tangled and embarks on a lot of spraying of leave-in-conditioner and brushing with her left hand which migrates her part further to the right. Can you help Mia work on this, break it down, etc?”

Then, I went online and searched for “one-handed ponytail” and posted to ask other families with stroke survivors for their experience with kids learning to do ponytails. One replied that her daughter had learned at age eight. Another told me how ambitious Mia is to be attempting this so young.

I thought about putting out elastics of various size and texture to let Mia experiment. But, life is busy, and I haven’t done much to support her, and still she’s learning, very much on her own initiative and with the ongoing model of Zoe.

At Mia’s weekly occupational therapy, that first week of March, they talked about how frustration comes with learning something challenging. They experimented with doing things in front of Mia so she could see and feel to get the concepts more solid. The therapist even offered that Mia could try on her hair. Instead, they made a bunch of yarn to use for practice. And, in that way, Mia learned the concept of twisting and doubling over the elastic to loop it through a second time.

I’ve seen Mia successfully make a ponytail in her hair once. Even doubled over, the elastic was too loose and fell out after about half an hour. I had no idea she could do pigtails, and since I didn’t see her doing them, I don’t know exactly how she managed, except that she must have reached over around her head to do the major work with lefty.

Since I don’t have good video of her working on this new skill, I thought I’d share another recent clip of a different self-defined fine-motor task. I got the girls new socks and Mia set herself the task of folding them all into balls. Enjoy and look to see how she uses her two hands differently. And, if you listen, you’ll hear Zoe in the background, alternately vying for attention and cheering Mia on as she folds socks. That’s our normal. Zoe said just this morning, “Mia’s learning early with the pigtails and ponytails!” Mia’s persistence, determination and inner drive are all quite remarkable, even more so because she’s not yet five.

I managed to capture a video of Mia making a pigtail. Notice how she gives each of her hands different jobs at every stage of the process. And, you can see her moment of pride as she accomplishes what she set out to do. Enjoy!