Two Thursdays ago, I took the morning off from work to take Mia to the pediatric stroke clinic. It was our fourth visit to the stroke clinic. We went when she was two months old, fourteen months old, two years old, and here we were again at four years old. 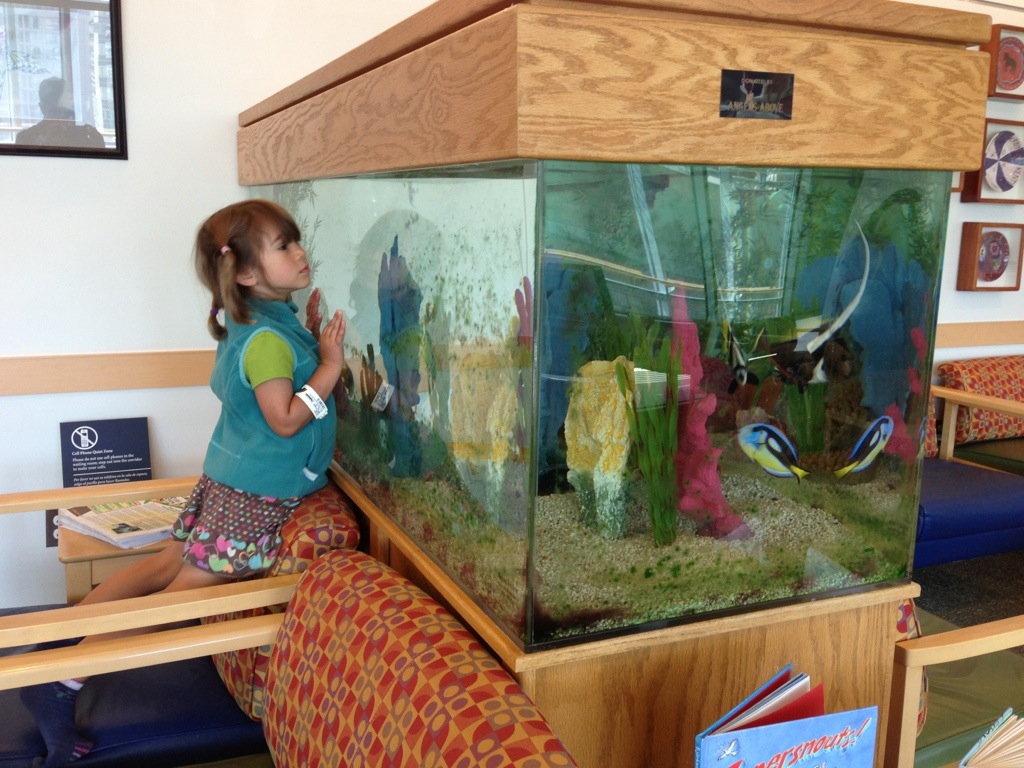 Two years ago, when she was two years old, I agreed that she could be part of the International Pediatric Stroke Study. That means visits every two years until she turns ten.

Mia dozed in the car on the drive into Boston. As we descended into the parking garage, going around and around and down, she awoke and told me, “Park over there, Mommy.” She pointed to the left and the signs were telling me to go right. When I parked, she got upset, not quite understanding my explanation about why I couldn’t park where she wanted me to park. She recovered after a few minutes and noticed the numbers on the wall in front of us. Pointing, she said, “That one has two ‘5’s. And, that one has one ‘5’ and that one over there has one ‘5’ too. That one has a ‘6’ like Zoe. And, that one has a ‘4’ like me!” The numbers were 504, 505, 506. Zoe is six years old. Mia is four. Just a few months ago, Mia’s preschool teacher told me that Mia was not yet recognizing numbers.

As we walked through the garage to the elevator, she told me, “When I was a baby and toddler and you took me to the doctor, you used a stroller.” I said, “That’s right.” She continued, “Now I’m big and don’t need a stroller.” We haven’t used a stroller for more than a year. I find it fascinating to see what she remembers. I find it interesting to see what I remember. Summer visits to the hospital complex where she was in the NICU are tinged with post traumatic stress for me. The heat and humidity take me back to my early days finding my way around.

The stroke clinic is in the outpatient building on the eighth floor. We were on the sixth floor for Mia’s appointment with her neurologist just a month ago.

We stopped in the café on the ground floor for some snacks and to use up some of the time we had to wait. On the elevator, Mia asked me to show her the ‘8’ so she could push the button to get us up to the eighth floor.

The stroke clinic is run out of an office shared by hematology and oncology doctors. The toys are nicer. The atmosphere is quieter than the sixth floor wing shared by neurology and gastroenterology doctors. There seem to be more signs warning to wear masks if you are coughing. I started thinking of cancer patients with compromised immune systems. We walked past the resource center for cancer. Prayer flags, decorated to honor patients are strung along the sunlit hallway.

As we checked in, the administrator took special care to make Mia a patient wristband with stickers on it. Mia chose rainbows, one for the wristband and one for the back of her hand.

A huge bin of giant coloring books was on the floor with an inviting sign urging kids to take one. Mia chose a Noah’s Ark coloring book. She got busy playing with the toys and then spent some time looking at the fish in the giant tank.

We went back to use the bathroom and Mia was a little confused because it wasn’t in the same location as the one from a month ago. I reminded her that we’re on the eighth floor now, not the sixth. 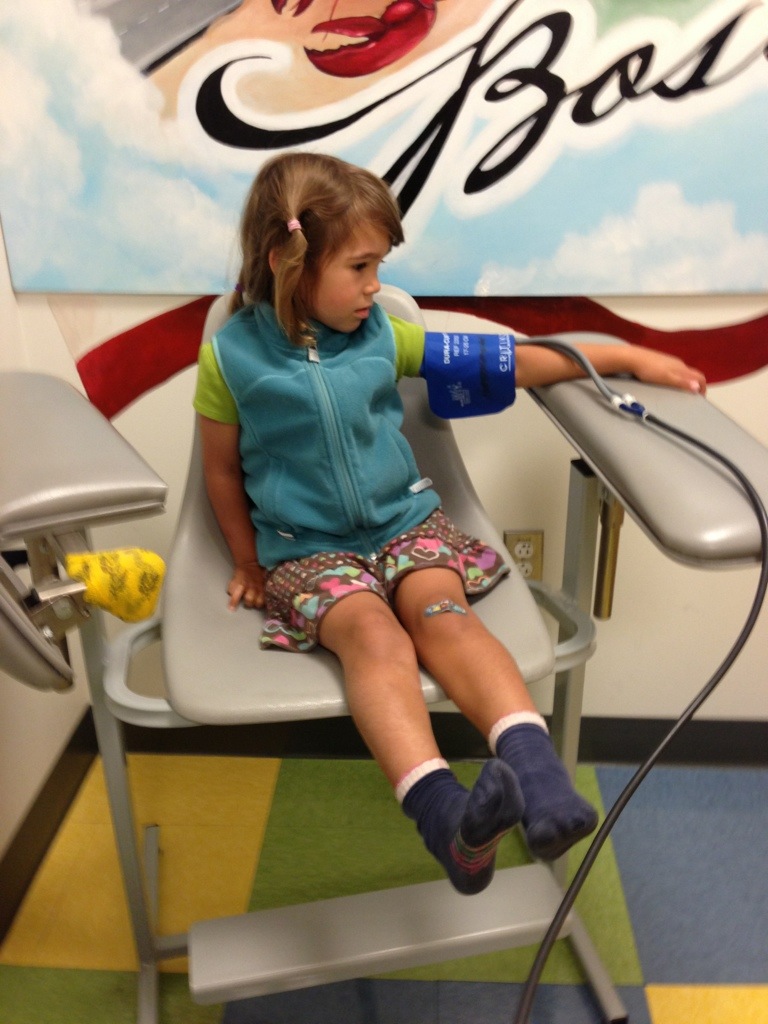 We returned to the waiting area and Mia asked to use the iPad. She continued to play on it after we were taken back to our exam room.

They all came in together, two neurologists, a hematologist and four young women observers, at least thirty minutes after our scheduled appointment. One of them commented about the iPad, “It’s kind of distracting.” I managed to persuade Mia to turn it off. She did so spontaneously with her right index finger. Mia became alternately goofy and shy, leaning onto me and burying her head in my chest. She wouldn’t talk much. She did eventually finish eating her yogurt and used her right hand to bring the spoon to her mouth when they asked her to do that. She was eager to show them videos on my phone of herself riding her bike, swinging from the monkey bars, doing skin-the-cat. I answered their questions and tried to direct their attention to things I notice. I told them about the conversations while parking, about 504, 505, 506. One of the neurologists said, “It must take a long time to get out of the car.” I asked if they are familiar with Dr. Karen Pape and her work. I told them about her recent recognition of Mia as an outlier. I found the video of Mia doing skin-the-cat. They seemed rushed. Mia was eager to get to the part where they ask her to run up and down the hallway. She also got to hop on one leg down the hallway. All eight adults watched as she dashed back and forth.

Back in the room, one of the neurologists said, “Even though she’s doing great, we think you should go back for a neuropsych exam next year when she’s five, before kindergarten.” I said, “We went when she was three and the neuropsychologist wants to see her when she is six, before first grade.” They conceded, “Oh, she’s the expert.” Meanwhile, Mia grabbed both of my hands, and climbed up my front to flip over. One of the doctors got a tear in his eye as he remembered his younger daughter doing the same.

They asked us to come back in two years after the neuropsych exam and they mentioned that the administrator could help coordinate the scheduling. That’s another difference from the regular neurology office. There, I have to remember when to schedule the appointments. Back in the lobby, the friendly administrator asked for the plan and wrote some notes to contact me in March of 2015 to schedule the neuropsych appointment that June so the stroke clinic appointment can be in August after the report is available from the neuropsychologist.

While it’s a huge relief to not have to go back for two years, I find myself frustrated with the kind of disconnect that we experienced. It’s so stark in contrast to the validation from Karen Pape. It’s stark in contrast to the Feldenkrais lesson Mia received this morning. I understand that the standard time slots allotted even for clinic appointments don’t allow time for real observation or connection. But, it saddens me that their questions didn’t go deeper, that they didn’t take more of an interest in a kid doing as well as Mia. I left them with the address of this blog, unsure if anyone will take the time to learn more about our struggles and triumphs.

This morning, we went to see Matty Wilkinson and Jennifer Lee for a Feldenkrais lesson. Jennifer was visiting from California and mentoring Matty. Their approach was so gentle, and even when Mia resisted Jennifer’s touch at times, we three adults danced together in a way that gave Mia support for a full forty-five minutes to sense and feel herself in movement.